Reinforcement, thought leadership, announcements
and blogs from the MOR team.

All of this year’s conference attendees and all MOR staff members were invited to complete a personal assessment tool called the Strength Deployment Inventory, or SDI for short. It was a wonderful opportunity to reflect on the sometimes messy business of engaging with other people who *gasp!* don’t see things exactly as we do. Susan Washburn, SDI certified MOR coach and workshop leader, managed the process and guided us all in interpreting the results.

SDI measures two things: what motivates our interactions with others when everything is going well, or we are “in our happy place” as Susan described it, and how our behaviors shift when we are faced with conflict. “Conflict” can be anything that challenges our preferred modes of behaving. SDI was a natural fit for the conference theme of disruptive change because most of us are being asked to move out of our happy places and into uncertain territory. Grounding ourselves in self-awareness and awareness of others, which is the ultimate purpose of SDI, is one way to improve our effectiveness and tend to our emotional health.

[Porter:] “When we are free to pursue our gratifications, we are more or less uniformly predictable, but in the face of continuing conflict or opposition we undergo changes in motivations that link into different bodies of beliefs and concepts that are, in turn, expressed in yet different behavior traits.” Porter’s description of the conflict sequence suggests that people experience changes in their motivation predictably and sequentially in up to three stages. The first stage is characterized by a concern for one’s self, the problem and the other person; the second by a concern for one’s self and the problem and the third by a concern only for the self. The theory further states that the universal productive motive of behavior in conflict is to preserve personal integrity and self-esteem.

Conference participants received their SDI reports in table groups. The reports were in the form of a one-page graphic with a colorful triangle and a small handful of numbers (see illustration below). Each person’s triangle featured an arrow that revealed both his or her “happy place” behaviors and where he or she went to when conflict arose. People were identified as colors. Blues were “altruistic-nurturing,” reds were “assertive-directing,” and greens were “analytical-autonomizing.” There were color combinations and there were people who straddled all three types. It was quite tempting to peek at others’ reports, and there was nervous energy in the room as people scanned their results to see what judgment might have been passed on them. They needn’t have worried because, as Susan pointed out, no mode is inherently superior, and besides, a person can be very skilled or very inept at any mode. So there. Another, amusing reason why people had little reason to worry is that most people are quite pleased with their preferred mode of behavior and see it as “the best.” That was an insight all by itself. 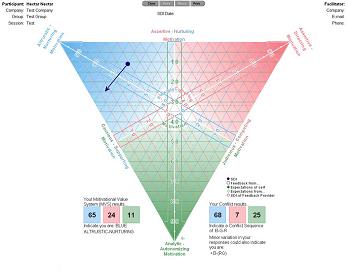 Later, Susan discussed the SDI Conflict Sequence results. People were asked to imagine situations where the tensions between them and others escalated. How did that feel? How did they react to strong opposition? How did they react when they had lost hope for a result that left them feeling whole? It was more than a little useful for everyone to appreciate what really makes them tick, what makes others tick, and to appreciate that we have it within our power to recognize our patterns of behavior and alter their course.